The NA360 absolute encoder reports the absolute position of a shaft angle in 0 to 359° format.

The encoder has two parts;

1/ The sensor, a synchro transmitter (working around 268Hz Diameter 63mm /
2.5inch) , with a strong aluminium body and ball bearings.

The interface which transforms the synchro signal and calculates the shaft angle position, sends the result to the PC with the built-in RS232 output (9 pin Dsub that can be directly plugged into the PC). The sensor can be installed 5 meters away from the PC with the already wired encoder and interface.


The interface must be DC powered (from 8 to 32Vdc) and needs only 25mA. The supply is done with the two wires coming out of the RS232 connector on the PC side. The red wire is the positive and the black the negative. The position is sent by any shaft angle change, and if no change, each half second. The encoder is shipped with a baud rate of 4800b/s. Connecting any of the two points marked 1 to 5 on the PCB, will change the baud rate accordingly to 1200, 2400, 4800, 9600 and 19200 b/s by next powerup. 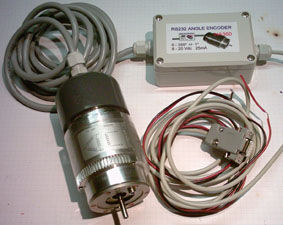 Not recommended, but if changed, the adjustment of the only variable resistor makes possible to tune the encoder within 1%. To retune, connect the jumper right from point 1, and read the info's send by the encoder to the PC screen. Use Hyper Terminal to make some test.